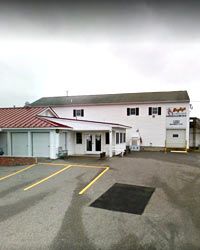 In 1915 Stephen E. Bayley settled in Pine Point, dug clams in Jones Creek and trapped lobsters off the coast to feed his wife and four sons. When there was enough left over to sell, his wife Ella would cook the lobsters and sell them to people through her kitchen window.

The years passed and the business grew enough so that Steve and his sons bought lobsters from other local fishermen, and built tanks so that they could store larger quantities of lobsters in order to sell to restaurants and other dealers. The business is now owned and run by Steve’s grandson Bill and his great-granddaughter Susan.

Login to check your balance or redeem rewards

Quite a few of our commonly asked questions revolve around the phenomenon of the blue lobster. The picture I have posted here is of a blue lobster that we had in residence about fifteen years ago, Clawdon Blue (any comments will be forwarded to the smart guy who named him). He is on a cement floor next to a normal lobster of the same size. Both were live lobsters. Though I had to import this photo into Photoshop to post it, I can assure you that the colors are real. Plus, I am just not that good with Photshop.

Researchers have determined that lobsters have proteins in their shells which create red and blue colors. The normal mixing of these two proteins causes lobsters to be a mottled brownish black color, with every lobster having a slightly different hue. Occasionally, a genetic occurrence will cause an overabundance of the blue protein and the lobster will look like our friend Clawd. We have also had lobsters brought in by our fishermen that have an overabundance of the red protein and they looked like fully-cooked lobsters in the tank when they were live. When cooked, the blue lobsters still turn red, but it is a slightly lighter shade.

Get the full story here: